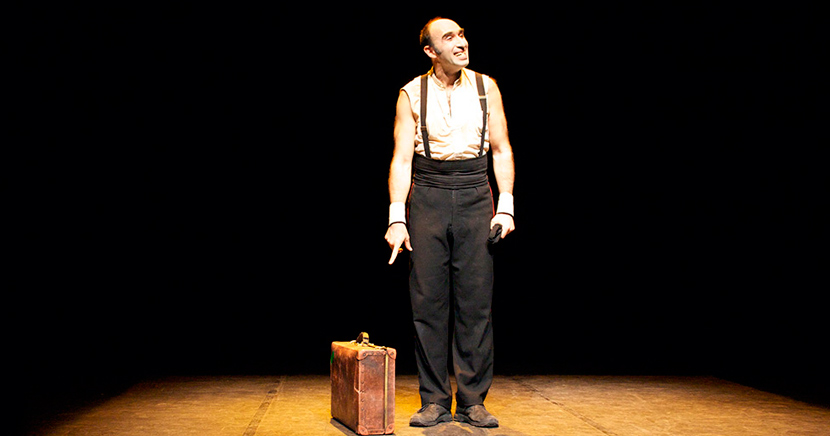 A Monologue with a Suitcase

“…It begins with beautiful poetic visions that merge into sudden farcical moments brought about with the presence of clowns, artisticparodies, pranks, cartoons,annoying hums,musical minuets,hints of opera,circus amusements that flare into a kaleidoscope of vaudeville and verlaniano mime, grimaces,strange and absent minded movements…… ending with a well studied plan and acrobatic juggling, cutting and malicious pranks towards the physical abnormalities of GuerassimDichliiev (calculated with millimetric precision by Costantino Raimondi's stage direction)”

“…The expressiveness of the actor,his body and his words help the audience understand the many subtleties of the story,experiencing states of mind that swing from joy to delusion,anger,emotion: tears that suddenly turn into laughter, sadness that turns into euphoria. Emigration and intergration are the themes that subtend this virtual journey. The casting scene is hilarious, where the actor puts all his hopes for a better future by proposing 3 pantomine scenes infront of an unflexible panel of judges.”

“…The ‘off’ , is it a festival or a fair? GuerissimDichliev has lived in paris for more than 20 years. This robust fellow, that walks about the city dragging three or four suitcases, speaks perfect french with an eastern european accent that almost seems fake. You don’t believe me? And he shows you his i.d – undoubtedly not an unusual habit for him.”

“…GuerassimDichliev doesn’t back down and makes it the theme of his show… This gigantic dreamer goes from one disillusion to another always holding on to his suitcase and keeping incredibly optimistic all the time.”

The most eloquent mime on the planet: “…The stage presence of GuerassimDichlievis breathtaking. This 1.86 mt tall man – with balkan features – labourers arms, long legs and a caotic set of teeth – seems more like a giant from a medieval tale than from a mime… he is the best example of his kind in the world…”

“…A pièce almost without a script,but extremely rich in meaning and laughter,thanks to the refined art expressed by the great mime actor GuerissimDichliev.”

“…The body fills the stage and tells a story. The powerful presence of an excellent actor on stage that pours out art from every pore of his body… a special praise goes to the little Fiorenza who in the last scene tenderly holds the hand of the unfortunate character, and while walking… Poetic, amusing, painful. Melancholic, a union between past and present this precious gem shows us what it really means to tread the stage with his skills of body language, telling a simple story, without ever falling into trivial issues regarding contemporary european history.”

“…The final scene as Costantino Raimondi emphasizes is identical, a cinematographic ellipses that is proposed on stage. Guerissim Dichliev charms the audience with his powerful body language, a tender and intense imagery of his own personal story, the story of artists that make the world their home.”

“…The theatrical power of mime, has survived an era of special effects,3d films,musicals,glitter and sequins , but also has so much to say on themes like journeys, suitcases, lostsouls, estrangement from modernity.” 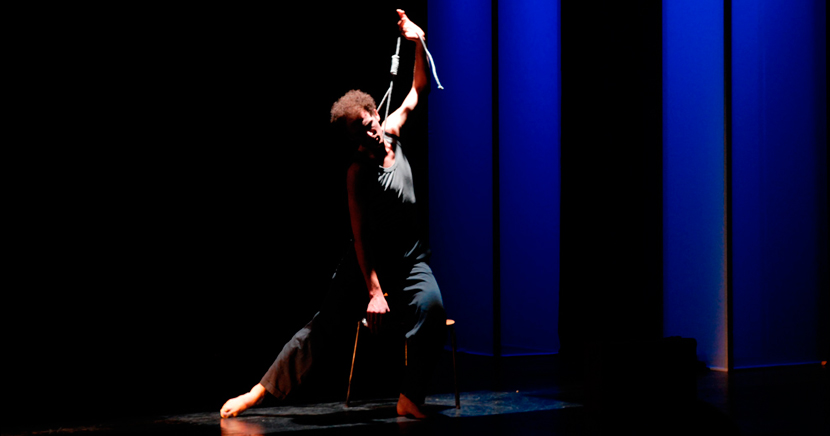 “…Between the lines, the show makes a tribute to theatrical art, meanwhile playing on the element of examination and its voids, fragmentary nature, a space left to its own in a world vulgarly called theater.”

“…A multiethnic theatre, that speaks the language of its performers, understood by those who don’t even have the same nationality as the actors.”

“…The fragmented speech is naive but nevertheless it is animated by the exuberance of the actors,that find themselves among the shabby trappings of a music hall that gives hope to their lost origins.”

“…The dialogue, subtle but at the same time biting, blends in with a natural manner to gesture(the latter elevated and powerful in its expression) and gives the audience through an evocative atmosphere, immense moments of interest and emotional impact.”

“…There are at least three reasons to go and see ‘ProveRewind’ by Costantino Raimondi. The first, is the theatrical company that becomes interpreter and subject of the show. The second reason is, the complementarity forms of expression,mime,dance and speech. The third,when the tune and the beat of the play changes and disrupts all the certainties – the metatheatricality, the imigrant’s suitcase, etc… and the ‘leap’ of salvation comes about thanks to self –mockery which only in part is absolving.”

““…An enjoyable and amusing show about four characters and a sequence of events full of humor and self-mockery, singularly each character recalls how they pursued their dreams to become actors, and then to find themselves on the same stage,same theatre. Moments of hilarity and laughter suddenly abandoned to give space to reflection, melancholy and doubt. The show received big consent by the audience and critics, many awards won throughout the year for ‘Prove (Rewind)’. The award Girulà, Teatro in Napoli for the category Drammaturgia dello Spettacolo(Theatre Entertainment).” 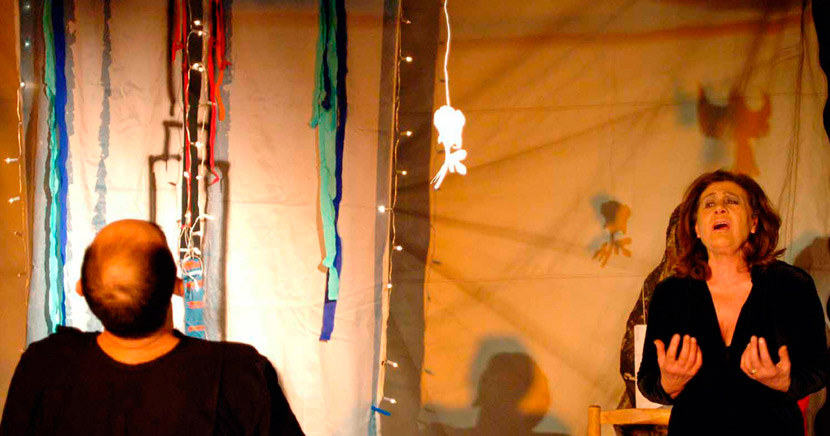 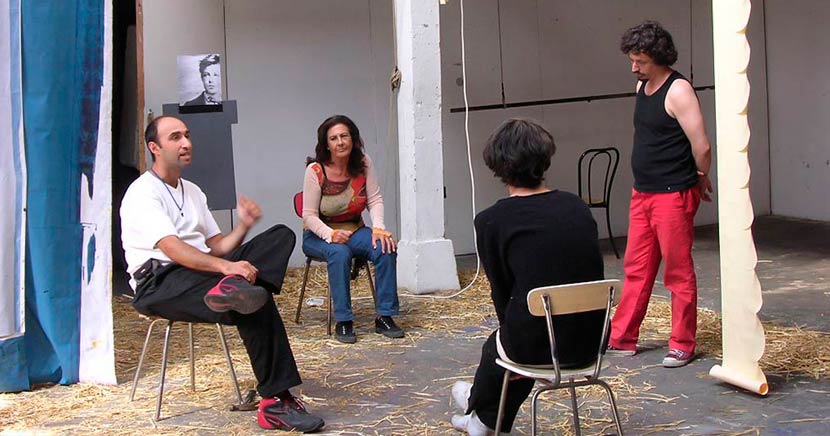 “…Confronting and harmonizing their cultural components but above all their sensitivity, they give body and soul to a tribute that if represented in another manner would have resulted in a sterile intellectual intervention.It is an ironic and alarming journey,but at the same time impregnated with astonishing gentleness and transgresiveness.” 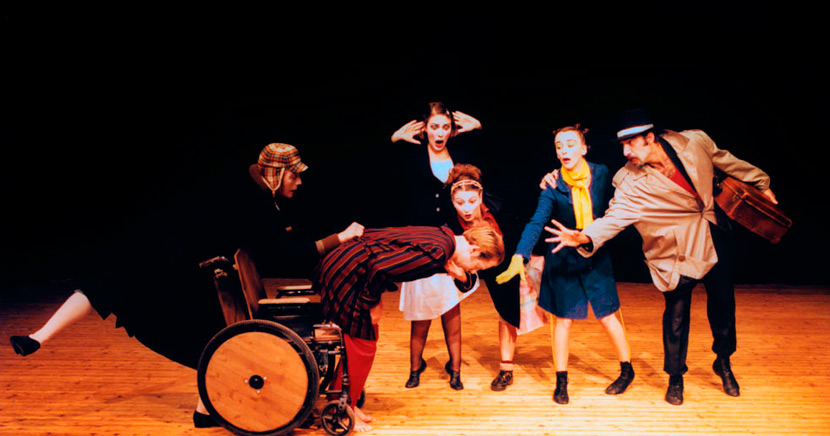 “…Amazement and emotions are guaranteed at the Luxeil Theatre , mime , dance with a pinch of humor: this is a wise engineered mix by the Salto Theatrical Company that takes the spectators into the world of Giovanni. ‘Amazing!’ It is difficult to find words to define ‘Carnevale di Giovanni’, the show by the Salto Troupe is exceptionally out of the ordinary.”

“…Absolutely amazing the students of Marcel Marceau and Corinne Soum. Directed by Costantino Raimondi. Young and enthusiastic they already seem to be masters in corporeal drama expressing more than words could ever say . They present a different type of theatre and of rare talent, the audience demonstrated immense pleasure and gratification by clapping non-stop and not wanting to leave the theatre straightaway. Just to mention that sometimes it is still possible not to regret the price of a ticket.”

“…The young actors of the Salto Theatre Company have perfect technique and skills and most of all a burning imagination, they use body gestures to tell a short story using quick brief emotions, sudden entertainment, unexpected games and unusual tenderness signed by the director Costantino Raimondi… bodies pile up and meet up in an indecent mime, sophisticated, comical, chases, disguises and citations from a shabby cabaret. Perhaps they will be successful in waking up their friend Giovanni.”

“…Certainly Costantino Raimondi work is a seductive multiform show, where body expression and acrobatics are surreally associated to images and sounds, that above all accompany a dramaturgical journey, from time to time aggressive and poetic, sensual and comical, fascinating and alogical.” 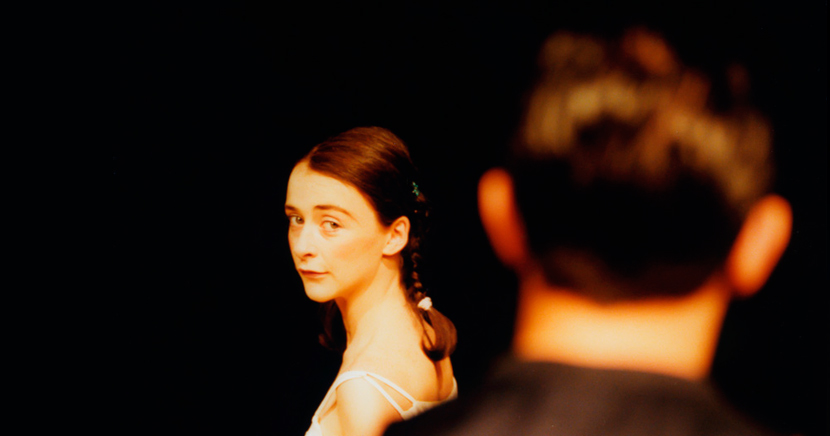 “…International Festival of Pantomime and Monodrama Zemun (Serbia), Students of the international school Marcel Marceau win the prize for the best show ‘I Colori Del Viaggio.’ director and corporeal drama by Costantino Raimondi.”

“…An Artistic dimension, dancers, singers,actors,set designers, all part of this adventure called ‘Unasettimanaparticolare.’ Every evening there is a play or some sort of event inspired by the pure tradition of Naples.”